Where Are Coffee Beans Grown? Find Out Here! 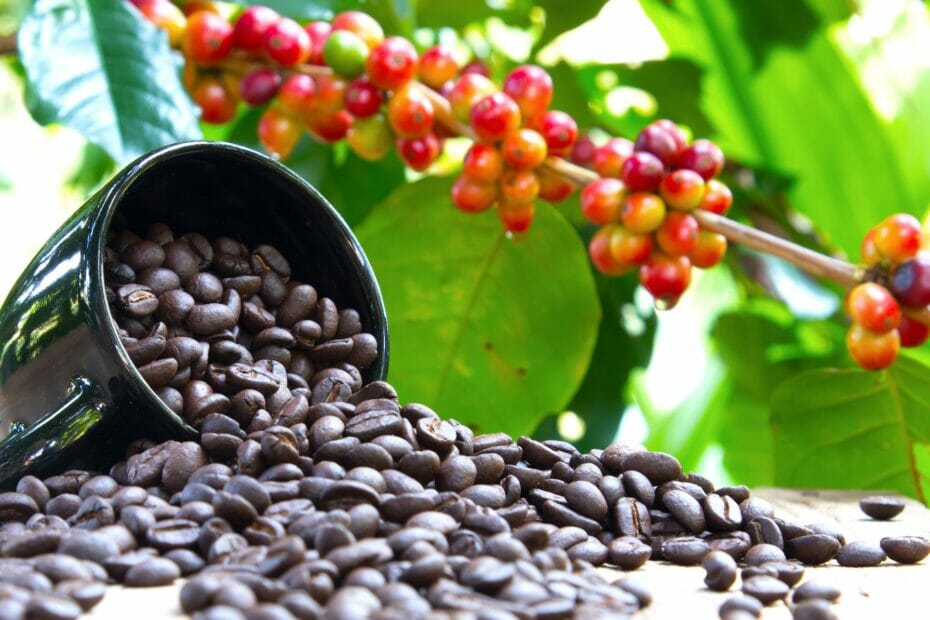 When you stop for a quick mocha or flat white in your local coffee shop on your way to work, you may rarely stop and think exactly where your coffee has come from.

Some coffee shops purposely work to promote the ethical sources that they buy their coffee beans from, but most will miss out the origins of the said beans. So the question still remains: where are coffee beans actually grown?

Much like the cocoa bean, coffee beans are grown on a type of shrub or bush conveniently called the coffee plant. If you are ever on the lookout for a coffee plant, then they are recognizable by their dark green, waxy leaves and often resemble a grapevine.

This particular variety of coffee plant is not limited to one country or region and is in fact grown all over the world, but especially so in countries running in line with the equator as a hotter climate is offered to allow these plants to produce the best beans.

Due to their elite growing conditions, these coffee beans are mostly used in your more expensive cup of coffee. These beans are also not harvested as soon after they have grown and so are given significantly more time to develop a deeper flavour.

The other popular coffee plant used by cheaper home brewing brands and chain coffee chops is the robust plant. These plants are in abundance in Vietnam but are also grown in Indonesia and various African countries.

Part of the reason that the robust coffee plant is most popular in these countries is due to the plant’s natural resistance to disease and the considerable amount of produce it can provide the farmer per year. It is the perfect plant for smaller, poorer farmers as there is little risk that comes with the plant in terms of lack of produce.

Although coffee beans produced by these plants are harvested quicker than with the arabica plant, robusta coffee has way more caffeine in it. For this reason, it is the plant of choice for strong coffee goers so want to the alertness that typically comes with caffeine consumption.

Where Are The Beans?

Is it true that coffee grows on the coffee plant, however the name ‘beans’ may be a little misleading. The coffee bean should actually be called the coffee seed.

If you were to look at a fully grown coffee plant ready to be harvested, you would not see bean but instead berries known as the coffee cherry. Much like normal cherries, the coffee cherry is a deep red colour when it reaches its prime harvesting window and must be processed as quick as possible once they have been picked otherwise the cherry will go bad and will ruin the coffee bean.

Once picked, the cherries are either left out to dry in the sun and are tended to through the drying process or they are pulped straight away by using water and are then left to dry. Then you have your coffee bean which will go through several more processes before eventually getting to your local shop.

As mentioned, the various types of coffee plants grow in various countries in the world. However, there are certain countries that are able to grow substantially more coffee beans due to the their closeness to the equator and thus their ideal coffee growing climates.

It was not until the 18th century that the coffee plant become familiar to Brazil when French settlers transported the coffee plants from France to the country. What the French settlers did not expect was for Brazil to become the world’s largest coffee producer by the 1840’s, a profit that has significantly driven the Brazilian economy since.

Taking such a early lead in the coffee growing game has allowed Brazil to continue being the world’s leading coffee producing country in the world today. In fact, it is estimated that the substantial amount of coffee produced in Brazil is responsible for more than one third of all coffee production in third world countries.

Due to the large number of robust plants that naturally grow in Vietnam, the country was able to push into a then niche market and make a name for itself, driving the Vietnamese economy.